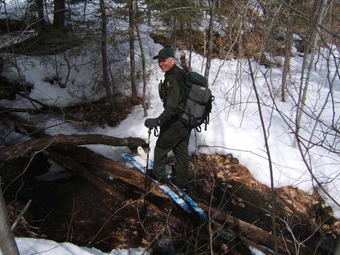 Steve is an owner and the Chief Operating & Financial Officer for WPM Inc.

With a college education in forestry and surveying, a lifetime of construction experience, and 25 years as a professional Forest Ranger, Steve has the knowledge necessary to create a quality recreational experience and an understanding of how to effectively protect a wilderness environment and it's users.

The unique and independent nature of the Forest Ranger job allowed Steve to develop a skill set that touched on the many aspects of protecting the wilderness environment. Steve's ranger district encompassed more than 90,000 acres of New York State forest preserve lands. He was responsible for providing all aspects of search and rescue, wildland fire suppression and law enforcement activities on those lands. His routine patrols in the wilderness helped him develop opportunities in the backcountry that provided quality recreational experiences while maintaining the wilderness character of the environment.  As a ranger Steve was a sworn police officer and carried a firearm along with other police tools daily throughout his career.  He believes that the job of a Forest Ranger is to protect the environment from the people and the people from the environment.

Developing a quality trail system that was cohesive and allowed people to enjoy the wilderness surrounding North Creek, NY was a highlight of Steve's career. By building this new trail network Steve was able to link two communities and recover a historic ski trail system. These new trails now bring people to river and mountain views, waterfalls, glades and marshes that had been previously inaccessible and provide some of the best skiing in the East.

Organizing and participating in Mountain Search and Rescue was one of Steve's favorite duties. Steve has particpated in hundreds of search and rescue missions in the Adirondack and Catskill Mountains. He has developed  new rescue techniques and was active as a Operations Section chief, rope rescue rigger, swiftwater technician, backcountry mountaineer, helicopter crew chief/hoist operator and lead airboat operator.

During his career as a Forest Ranger Steve acquired the highest level of national wildland firefighting suppression skills in the NY State Forest Rangers and has directed firefighting operations in seven states.  He was a nationally qualified Operations Section Chief who directed Operations for the Northeastern Compact Type 2 Incident Management Team and the NYS DEC All Risk Incident Management Team.

Steve has been a founder of three volunteer trail organizations that provide maintenance and support for multiple trail systems.  Steve is on the Advisory Board for the Adventure Sports Program at SUNY Adirondack and is a founding Director of Adirondack Treks, a youth venturing organization. He spent 5 years as Assistant Coach for the Johnsburg Central School Alpine Ski Team.

Steve is an Advisor for Salus Security Devices LLC. A biometric firearms security device creator and manufacturer whose mission is to improve firearm security while providing for rapid access.